What Are Meme Coins?

The year 2021 saw the amazing rise in the market prices of meme coins, especially dog-themed meme coins. As of November 2021, one of the most popular “breeds” is Dogecoin (DOGE), along with its rival Shiba Inu (SHIB).

Meme coins are cryptocurrencies inspired by memes. Compared to major cryptocurrencies like Bitcoin (BTC) and Ether (ETH), they tend to be very volatile. This is probably because meme coins are largely community-driven tokens. Its price is usually influenced by the sentiment of social networks and online communities. This often leads to high expectations, but also FOMO and financial risk. While it is true that some traders got rich off meme coins, many lost money due to market volatility.

Some say that 2021 was the year of the “dogs” in the crypto world. The canine duo Dogecoin (DOGE) and Shiba Inu (SHIB) led the pack of meme coins and skyrocketed in price and market cap. As of November 2021, DOGE has gained over 8,000% since the start of the year and is ranked 9th by market cap on CoinMarketCap. Its competitor, SHIB, has increased more than 60,000,000% since January.

What Are Meme Coins?

Meme coins are cryptocurrencies inspired by memes or jokes from the internet and social networks. The first meme coin to be created was Dogecoin (DOGE). It was released in 2013 as a parody inspired by the popular Doge meme of a Japanese Shiba Inu dog.

Meme coins tend to be very volatile. They are primarily community-driven, and can become very popular overnight as a result of support from online communities and FOMO. Still, its price may also crash unexpectedly if traders turn their attention to the next meme coin.

Another characteristic of meme coins is that they are often in huge or unlimited supply. For example, Shiba Inu (SHIB) has a total supply of one billion trillion tokens, while DOGE does not have a maximum supply, and more than 100 billion tokens are already in circulation. Since meme tokens generally do not have a coin burn mechanism, their huge supply explains their relatively low prices. With just 1 USD, you can buy millions of meme tokens. 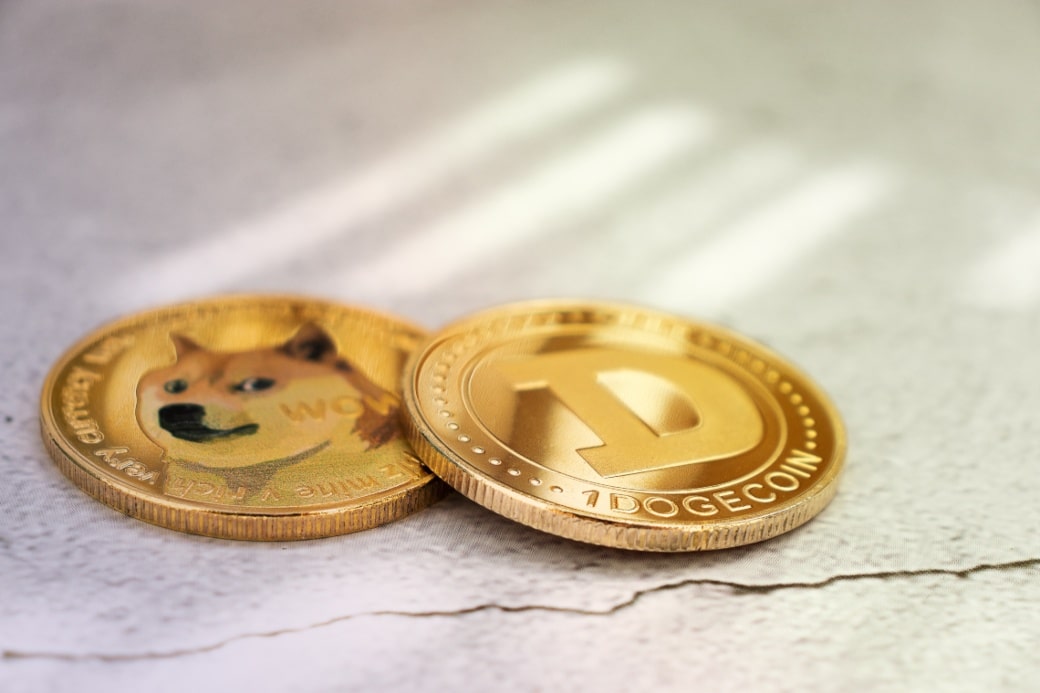 Why Are Meme Coins So Popular?

Although it is difficult to define specific reasons, some say that during the COVID-19 pandemic the cryptocurrency market reflected growth as retail investors sought to hedge against inflation. Meme coins also flourished amidst this rush, growing in both market cap and variety.

It all started after the GameStop (GME) and AMC Entertainment (AMC) “meme stock” saga at the end of 2020 when the Reddit community inflated the price of these stocks by up to 100 times in a few months. In January 2021, a group on Reddit joked about possibly boosting the price of DOGE to create a crypto equivalent of GME. The trend caught on, and along with the influence of Tesla CEO Elon Musk’s tweets, the price of DOGE skyrocketed. Dogecoin hit a new all-time high of $0.73, up more than 2,000% in five days.

However, in May 2021, Elon Musk publicly joked about DOGE on TV, and many consider that to be the cause of the subsequent price drop. Many traders then turned to other meme coins on the market, such as the “Dogecoin killer” SHIB. In turn, retail investors felt FOMO and bought meme coins in the hope of becoming millionaires overnight, sparking another bull run for meme coins.

Technically, their low price doesn’t mean much, given that these coins are in huge supply. Still, owning millions of tokens of a certain meme coin feels different than holding a fraction of ETH or BTC. Traders can earn thousands or even millions of DOGE, SHIB, or Akita Inu (AKITA) tokens with just a few dollars.

Aside from being driven by the possibility of huge profits, the meme coin craze is also influenced by their respective communities. As we have mentioned, meme coins are inspired by popular internet memes and their purpose is to entertain; often, they are considered “inside jokes” of a community. Buying meme coins, in a sense, is a show of support for their respective communities. Following the GME stock market saga, meme coin traders inspired by the Reddit group SatoshiStreetBets began a “David vs. Goliath” battle by betting against the dominant cryptocurrencies. Because of this, the cryptocurrency market in 2021 has been flooded with community-driven meme coins.